The Driver's Handbook is the road rules handbook for all South Australian drivers, including learner drivers.
My Licence >  Safe driving tips >  Safer speeds

Speed is a key factor in crashes and road trauma. Exceeding the speed limit increases the likelihood of a crash. As your speed increases, your ability to react to emergencies and stopping distances increase. Other road users also find it more difficult to judge how fast you are travelling.

Visit the Red Light and Speed Camera's website for the latest information. 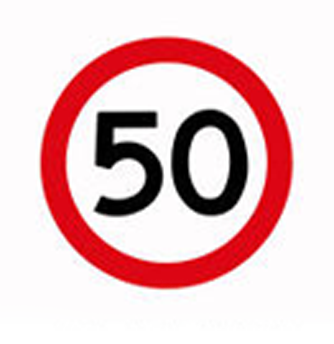 The faster you drive, the harder you hit.

For vulnerable road users, such as pedestrians, small differences in travelling speed can mean the difference between life and death. If you collide with a pedestrian, death or serious injury is likely even at relatively low speeds.

Research shows if you are travelling in a 60 km/h zone, your chances of being involved in a crash double with every 5 km/h increase in speed. Travelling at 65 km/h in a 60 km/h zone, you are twice as likely to be involved in a crash. A car braking from 65 km/h will still be travelling at 32 km/h at the point where a vehicle braking from 60 km/h has stopped.

There are two components to stopping distance:

Speed limits indicate the maximum vehicle speed that is permitted on that road. Exceeding the speed limit is illegal. If you break the law by exceeding speed limits, you will be subject to heavy penalties, potentially including fines, loss of licence and imprisonment.

50 km/h is the maximum default speed limit in a built-up area.

100 km/h is the maximum speed limit on most rural roads in South Australia.

Exceeding the speed limit, driving at excessive speed, driving recklessly, at speed or in a manner dangerous to the public are offences that attract penalties, including payment of expiation fees and incurring demerit points.

How are speeding penalties set?

The following factors are taken into account when speed offence penalties are set:

No, speed enforcement has never been and never will be about revenue raising. Speeding fines raise revenue only because drivers have broken the safety laws put in place to protect all road users.

Whatever the legal speed limit, improved compliance with and enforcement of the limits plays a vital role in improving the safety of all road users.

Reducing expiation fees for low level speeding and increasing demerit points reinforces the fact that speed enforcement is focused on safety, and not revenue raising.

If everybody drove in accordance with speed limits then no speeding fines would be issued.

What happens to the speeding fines collected?

All revenue from anti-speeding devices is returned to road safety through the Community Road Safety Fund.