The Driver's Handbook is the road rules handbook for all South Australian drivers, including learner drivers.
My Licence >  The hazard perception test book >  Safe following distance 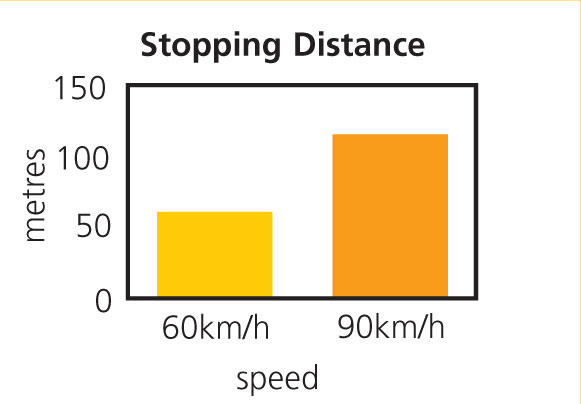 The distance that it will take you to stop your car depends on the speed at which you are travelling. The faster you go, the longer the stopping distance. For example, you need twice the distance to stop from 90km/hour compared with stopping from 60 km/hour, even in the best possible driving conditions - that is, on a sealed, dry road.

This means that you must increase the following-distance between you and the vehicle ahead as you increase speed. If you don't do this you may crash into the back of the vehicle ahead if it has to stop quickly. This type of crash happens to a lot of drivers each year, but there's an easy way to avoid this. It's called the "3 second rule". The "3 second rule"
This simple rule applies at any speed and is easy to use. Here's how. All you need to do when driving is watch the vehicle in front of you pass an object at the side of the road such as a power pole, tree or sign. As it passes the object, start counting "one thousand and one, one thousand and two".

If you pass the object you picked out before you finish saying all the words, you are following too closely. Slow down, pick another roadside object and repeat the words again to make sure that you have increased your following distance enough.

Practice exercises: Using the rule
When you are driving, practise using the rule when following behind other vehicles. You might be surprised how close to other cars you have been driving. Practise in different speed zones until the rule becomes easy to use.