NOTE: If you are the holder of a learner's permit or a provisional licence, you may be limited as to the speed at which you are permitted to drive. Refer to the Drivers and Licensing section for information about special speed limits that apply to permit and some licence holders.

The speed limit that applies to a road or road-related area is the maximum speed you are allowed to drive a vehicle.

How is the speed limit set?

Within South Australia (and in fact throughout Australia) the maximum default speed limit outside a built-up area is 100 km/h. The maximum default speed limit in a built-up area is 50 km/h. Unless a road sign or a licence condition indicates otherwise, these are the general maximum speeds at which you are allowed to drive. The circumstances under which these limits might be varied are set out below. Outside a built-up area, some roads may have a speed limit of 110 km/h shown by speed limit signs. You may travel up to this higher speed provided your driving licence permits you and it is safe to do so. Learner and provisional drivers, for example, must not travel at this higher speed.

Also the maximum speed limit for a vehicle that exceeds a GVM of over 12 tonne or a bus GVM over 5 tonne is 100 km/h, except in the case of road trains where a speed limit of 90 km/h applies on most roads. Refer to the Heavy Vehicle Driver's Handbook for more information on heavy vehicles.

In built-up areas, some roads may have a higher speed limit (for example 60 km/h or 80 km/h) shown by speed limit signs.

Some common examples of reduced speed limits are:

You must slow down to 25 km/h or a lower speed if required when passing an emergency vehicle that is stationary and displaying blue or red flashing lights or between two sets of flashing blue or red lights. 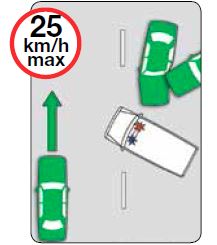 * For more information about expiation fees and demerit points visit The Penalties page.